I like this only slightly more than my last attempt at finding a new look for my blog.  It’s becoming clear to me that trying to customize someone else’s idea of how a blog should look isn’t working for me.  I truly wish I had the tools (read: smarts) to design and present you with the Real Me blog.  There’s one more item to add to my Bucket List : )

On another note and in the same creative vein, PD and I are hard at work trying to get our living room redone in time for the holidays.  I must say, it’s looking pretty good.  The living room, I mean… not necessarily meeting the deadline.  It’s becoming clear to me that some other holiday preps are going to suffer due to the time it’s taking… things like gifts and wrapping and baking and things.  The carpet is due to be installed on December 2nd so that doesn’t leave much time for putting up the tree and decorations.  BUT this pretty much happens to me every year, one thing or another puts a crimp in my time frame.  And just like every year, it will all get done and the Holiday WILL happen and we will be grateful for times spent with the family and all the joy that entails.

In the mean time, if any of you have any free time laying around, you’re more than welcome to deposit it into my bank.  Every single second will be greatly appreciated.  Remember, the real Joy is in the Giving : )  Kthxbai.

Stole this from Zefrank’s Twitter page.  I think it’s beyond awesome and I wanted you to see it.  Tell me your thoughts…

I had no plans for yesterday, but I was feeling an urgency to be productive.  Next Friday is the end of my Summer 4-day work week.  My Fridays have been full of appointments and errands and being out of town so I felt compelled to spend the day at home doing something that I not only enjoyed but would make me feel like I accomplished something.  I decided to start a watercolor.

I walked into my studio with a feeling of excitement.  I haven’t painted or done any artwork  for way too long.  Over the past few years when that creative urge would hit me, there was always something pressing to take care of and I’d been stifled over and over and over again.  Part of me was terrified that the urge would disappear altogether after having squelched it for so long.

It became evident in the first five minutes that I was going to spend a great deal of time looking for paint, paper and brushes AND a clear spot on my desk.  There was really nothing that I could accomplish without first doing some organizing and clearing away.

So I spent the entire day yesterday, not painting, but working toward being able to.  But my, oh my, that was an experience.  I can’t say it was hard work.  Confusing maybe, and a little overwhelming at a couple points… but I enjoyed it.  After all, my studio is where I’m comfortable and surrounded by things that I love and which inspire me.  I found things that I’d lost long ago and/or forgotten that I even had.  I could write an entire post on that stuff alone.

I really should have taken some before pictures because you can’t really appreciate how hard I worked getting to the after part. As it is, the pictures look like a page out of Where’s Waldo? I would never believe that I could have accumulated so much stuff.  Some of it I need (supplies) but some of it I need (for inspiration, reference, etc.) 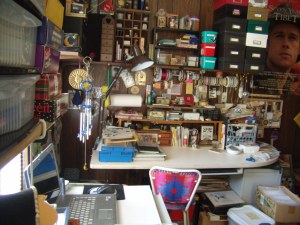 My Version of Where's Waldo?

You’re probly wondering what the heck it must have looked like before I spent hours filing away papers and labeling containers, right?  Well, let me tell you… it was a bit crazy in there.

By the time I stopped last night (and no, I’m not finished) it was ridiculous to even think of starting a project.  I have a bit more work to do in there, but at least I know that the next time the urge hits me, I can walk in, grab what I need and start painting.  And that’s a very good feeling. 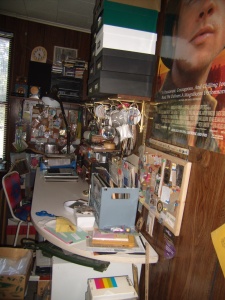 Can You Say "Clutter?"

Do you have a place in your house where you keep all your stuff?  A place where you can relax and dream and be yourself and play?  We all need one.  And we need to go there often and not neglect it.  I’m vowing to spend more time there, maybe even go up right now.

For years PD (the name I refer to the husband here to retain his anonymity) had been telling me that one day he was going to get a tattoo.  He’d wanted a black panther permanently inked on the inside of his forearm.  I’m not exactly sure what he was waiting for but it just never happened.

Then a couple of years ago when he became a huge fan of The Airborne Toxic Event, he started talking again about getting a tattoo but of something to do with the band.  Then more recently, the band Train‘s song Calling All Angels moved him to want a tattoo of the song title surrounding an intricate cross.

I’d had some money saved up and when his birthday came in April, so I made a coupon good for the tattoo of his choice and tucked it in his birthday card.  It was then that he started very seriously thinking of getting inked.  He spent a lot of time researching and deciding on exactly what he wanted.  But it came to the point where he couldn’t decide between his two final choices.  Neither one a panther, anything to do with TATE nor Angels.

I had an extra day off after we returned from Buffalo last Sunday and we decided that we would take that time and go visit a studio we’d always wondered about. And we did, mostly just to ask some questions and check out prices, etc.

The studio had six artists on staff and only one was not busy. Jerry began talking with him while I was nosing around at tons of pictures framed on the walls.  The artist’s name was Matt.  After talking a bit, Matt left the room and PD confided that he seemed strangely familiar to him but couldn’t place him.  Anyway, he showed Matt the two designs that he’d taken pictures of on his phone.  The larger of the two designs, Matt said would take a couple of hours and PD would have to make an appointment.  They decided that Wednesday would suit both of them. PD asked if he could possibly have the time to do the smaller tattoo and Matt studied it a bit and said that he could.  I’d never dreamed that when we walked in there that PD would be walking out with a tattoo.

PD filled out a release form while we talked to Matt and he answered a ton of questions that we thought of during the course of the conversation.  Matt made a stencil of the tat and checked with PD to make sure the size was good for the inside of his left forearm. Being that we hadn’t planned that PD would get a tattoo that day, I didn’t have my camera so I will only have the one “after” picture to share.  But I asked Matt if he would mind terribly if I did a blog post about the next session and he was very receptive.  So Part II will be more in depth and have pictures to go along.

Here is the end result.  It is the Chinese symbol for Patience and PD is hoping that it will be a constant reminder of something that he feels he lacks on a fairly regular basis.  I think it looks great and suits him.  He’s quite happy with it also.

I thought they were called Suicide Bunnies but it seems I was mistaken.  They are Bunny Suicides by Andy Riley and they are hilarious.  It’s sick as heck when you really think about it but these bunnies are not only determined to cross over, they are total geniuses when it comes to finding a a gazillion different ways.

I came across some of the comics quite awhile ago and I may have mentioned them here.  It was hard to find anyone else who’d heard of them.  And yeah, they looked at me kind of funny when I would say how hilarious it is to watch innocent, cute little bunnies trying to off themselves.

So yesterday when I was Christmas shopping I saw that they have a calendar out.  I would have bought it for someone or myself but it seemed kind of pricey for only twelve scenarios.  (Yes, I am cheap, but you knew that already.)  Now if it had been a daily desk calendar, I’d have paid more for it and I’d be wrapping a few of them for the crazy people I know.  And I’d have to have one myself.  Here is one of my favorites: 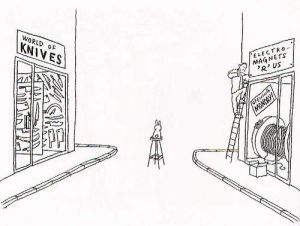 Check them out if you haven’t.  Judging by the collective sense of humor of (most of) my readership, I feel safe in saying that you’ll laugh pretty good. I couldn’t find a link that wasn’t to someone’s  blog,  and this was the best one I found, so I must give credit to Mr. Jimmy Ruska for his compilation, here.

This just in.  The ink is still wet…

One of my favorite songs in a brand new video that the band made themselves.  I have that on good authority.  They told me.   *wink wink*

Enjoy.  And don’t try to dance with your coffee.  You’ll spill it.  I know.

I HAVE THIS FRIEND…

… who’s pretty darn cool.  He’s got some wonderful insight into life and things.  He’s a talented photographer and has a wicked sense of humor.  He’s a Southern boy with great hair.  He’s got a beautiful family and a spiritual side that makes me jealous.

Only thing is, he’s got to be the center of attention at all times.  Sometimes his whining gets to me and just to pacify him, I decided to devote a post to him.

Make him feel as special as he is and go over and say hey to Joey.

I laughed, and if TC finds the time to come around he will too.  As for the rest of you,  you might want to pass on this one.

Put this on full screen mode for full effect.  I laughed my butt off.

(Thanks PB, that was the best chocolate chip cookie I ever ate…)

Not sure why Julia Child popped into my head but I went on my BFF YouTube to find the video of Dan Akroyd doing his impression of her. Did you ever see it? Hilarious to say the least. Anyway, I couldn’t find it but I found this and it made me smile. So I thought it might make you smile too. Tell me your favorite Belushi thing. I think he was pretty entertaining. Can’t believe he’s been gone for almost 27 years! And it just occurred to me, John Lennon died 28 years ago today.  Sheesh.

Oh and another thing. Something touched my heart today. Actually, I believe that I touched something in someone and he touched me back.
Amazing how just speaking what’s inside you can do a loop and come back and make you smile.