THERE’S A WORD FOR IT

Friday night I smoked the last cigarette.  Most of the people close to me are already getting used to watching me shove copious amounts of small candies into my face (of the M&M, Tootsie Roll, Buttered Popcorn-flavored Jelly Belly varieties to name a few.)  I’ve developed a fondness for a Rainbow trail mix into which I have just dumped the Jelly Bellies and more raisins and sunflower seeds.  Before I’m finished there may be everything but the kitchen sink in it.

I cannot believe the intensity of the cravings I’ve been experiencing.  Being that I’ve spent the last month or so tapering off, smoking only all-tobacco cigarettes, I assumed that the chemicals I was used to ingesting in my old regular brand were what would keep me addicted more strongly than the actual tobacco. I would have thought that at least a month would have been sufficient to get all those chemicals out of my system.

Poor PD, I didn’t realize he was standing two feet behind me just a little while ago when I yelled, at the top of my lungs, “I want a cigarette!” I probly scared him. But you’re right, yeah, no more than usual.

I have done absolutely not one constructive thing this entire weekend. I had planned to fill it with activities to leave no room for my brain/body to even think about how much it would enjoy lighting up. I can’t concentrate on anything long enough to accomplish anything. That makes me angry. Angry enough to want to light a cigarette.  In fact just about everything makes me want to smoke.  Here are a few things today that triggered an intense craving:

There were a ton of other things but just sitting here thinking about them is proving difficult.  So I’m going to stop for now.

Oh yeah, one other thing I’ve noticed… I can’t type for shit anymore.  Every third word or so I end up correcting.  Unnerving?  Yes!  Enough to make me want to smoke?  You bet your ass.  But I won’t. I’m going to go scream in the basement now.

Hi : ) Would love to stay and chat but I’m kinda crazy today. But I wanted to share this link with you that I found.  You can download 27 songs for free on iTunes from Nylon Magazine.  It looks very simple… like you just click on the Download button. It only took me about ten minutes to figure out how to actually get the songs but they’re good and they’re free so it was worth the trouble. I will tell you that what I ended up doing was pasting something in my redeem box on the iTunes store page.  As for what that was, I’m sorry I can’t remember.  It took two tries.  So I guess this is an exercise in creativity for y’all.  See who can actually end up with 27 free songs in their iTunes.  At any rate, the offer expires sometime in February so don’t dally. If you’re not hungry for new free music, don’t even bother, you’ll just end up getting irritated at me.  And I don’t want that.

Couldn’t you just smack me sometimes?  Hey, nothings really worth anything if it’s just handed to you, right?  Right?

I guess I better give you the link, huh.  It’s here.

So I got up this morning (didn’t wanna) and got ready for work, intermittently watching the bottom of the TV screen, taking stock of school closings, etc. to try and determine the condition of the roads for the trip to work. It didn’t seem too awful bad.  Got the car out of the garage and headed first to the post office to mail something.  The hill from our house to “town” was a little slick and slushy.  It was snowing still.  As I was leaving the post office, I took these things into consideration and thought of the possibility that, with the additional snow and the low temperature, things would more likely get worse than better.  I promptly turned toward home and went there.  Came here, whatever. I called off work and am now truly enjoying my morning coffee instead of guzzling it.

And I’m actually posting.  Imagine that.  It’s Friday and cold and snowing and I’m staying home and happy about it.

Incidentally, if you haven’t read my previous post and clicked on the Runaway Dorothy links, please do.  Dave has enlisted my assistance in getting some PR underway for the band.  I vowed to do what I could. The rest is up to you.

PD and I had a wonderful Holiday.  Lots of family around to make merry with, tons of great food and yummy junk, lovely gifts, vacation from work.  All around great times.  May post some pictures soon if I find the time.

A few months ago I came across a place to get my old blog published.  I deeply loved that old blog while I just have a passing fondness for this one.  My writing here is for crap and my posting is sporadic at best.  But I have a deep fear of the internet disappearing one day and losing all that I’d written on Old One Wink at a Time so I decided to get it printed.  It finally came in the mail day before yesterday and I was thrilled.  Like a dear old friend came to visit.

Let me tell you about Blog2Print, a division of  SharedBook Inc.  The actual process of putting the book together was fairly easy.  You’re able to design your cover and choose if you’d rather have hard back or a soft cover.  If I remember correctly there is a set price for each and if you have more pages than they specify, you are charged a set price per additional page.  At the time I placed my order, they were offering free shipping and that was a welcome discount.  If you love your blog as much as I do, I highly recommend looking into getting it printed.  If you have any questions, I’ll be glad to answer. I have lots more to say about it but that would take at least an entire post and I have some mail to answer and some time off to enjoy.  And I could do some shoveling, but hey.

I did.  And more about that later.  But right now I’m in the mood to convert some fans.  “Oh no,” you’re saying, “Linda’s on one of her recruiting binges…”

Yeah, well, that’s my prerogative and if you don’t wanna play along, you don’t haf’ta. But when this guy (and band) gets all rich and famous one day, you’ll say, “Linda said he/they would.”  And I believe that he/they will.  Just like I told you about Airborne Toxic Event.  Well, they’re getting there.

You see, I forget what day Dave Parnell of Runaway Dorothy started his endeavor exactly but he’s given himself nine weeks to become a Rock Star.  You can read all about his aspirations here. I’m embarrassed to say that I can’t recall where I heard Runaway Dorothy for the first time.  That’s one of the downsides to listening to the volume of music that I’m accustomed to.   Just like Airborne Toxic Event.  I wish to hell I could remember the first time I heard Sometime Around Midnight. (Notice the  432,192 views of their vid!)

The really cool thing about Runaway Dorothy is that they are SO good that they made me listen to music that’s not even my style.  It doesn’t fit a category (in my opinion) and I tend toward that kind of music and make my own category but I’m having to dig deep to find one for these guys.  Dave Parnell, the future rock star that I have a huge, but manageable crush on (Surprise Dave!  I bet you couldn’t tell…) describes their sound best when he says they, and I quote, “Sound like a blend of coldplay, bob and jakob dylan.”  You can hear their music here. I especially love Abilene and Chases and Caulfield.

I am the lucky owner of their cd The Arc (which is autographed as you can see in the second photo) as well as an awesome Tshirt (ditto that.)  I can hardly wait for summer to come because I can’t think of a better way to spend a warm night sitting on my swing listening to their music and wearin’ mah shirt. 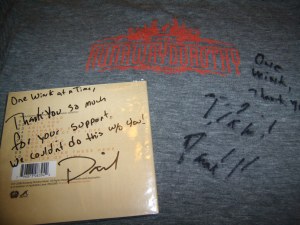 Now, as soon as Dave gets back to me with permission to post this, I’ll put it up.

And if he doesn’t, I’m gonna anyway cause he’s not my boss.  *wink wink* Unless of course I’ve talked him into letting me be a paid groupie roadie by now.